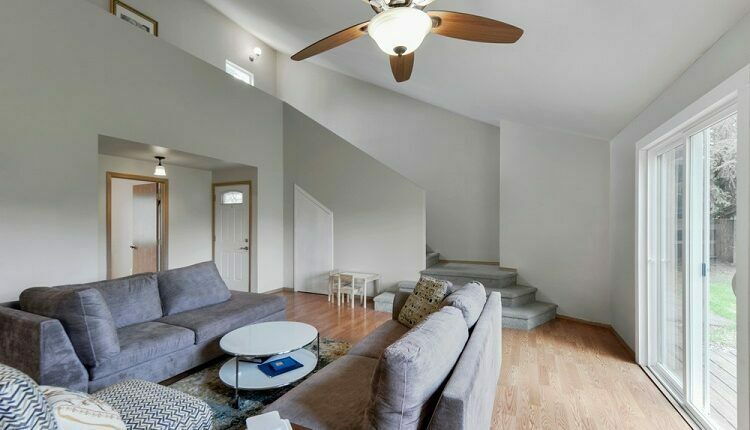 How To Install Ceiling Fan For A Vaulted Ceiling?

Rooms with vaulted ceilings are characterized by large windows allowing natural light to fill them easily. The combination of extended daylight and larger windows reduces energy consumption during summer. Installing ceiling fans in a vaulted ceiling is easier said than done. The angle of the ceiling stands out as a potent problem for interfering with the fan’s normal movement. The fan kit’s mounting components are mostly designed for a horizontal ceiling thus adding to the problem. Extending the fan using a rod and using special mounting brackets in the process can serve as an ingenious means of circumventing these concerns. Following these below-mentioned steps will bring down the fan considerably so that your ceiling height or structure doesn’t meddle with the efficacy of the fan blades.

Before starting with the electric work, you need to turn off the main power supply from the main circuit breaker box. If an existing fan is installed, then you will have to primarily remove it by unscrewing the mounting bracket and bringing it down from the ceiling. After removing the fan, you will also have to disconnect the wiring.

Now you will have to install a special mounting bracket for installing the fan onto the vaulted ceiling. These specialized brackets are also known as cathedral mounting brackets and have to be mounted onto the electrical supply. Here you will have to ensure that the angled side leans against the ceiling and its downward-facing side is horizontal. Mounting screws are supplied for attaching the bracket to the ceiling. The wire will have to be dragged down through the bracket.

Every fan comes with specific assembly instructions. You will have to follow them to complete the assembly process. However, refrain from installing the blades in this step. Rather, attach the extension rod with the mounting bracket that has been installed already. Now run the wires through and attach them with the extension rod. The wires coming out from the ceiling needs to be connected to those from the fan. It is necessary to color-code them in this step by connecting one white wire to another white one and the black wire to the black one. Twisting wire caps over them will help connect these wires. You will also find a copper ground wire which will have to be attached to the green screw in the fan’s assembly process.

In the wrap-up steps, you will have to place the wiring carefully back into the mounting bracket. Mounting screws are provided which allow attaching the mounting bracket and the top of the fan. Now test the motor by turning on the power but make sure not to leave it on for too long. If everything is working properly then install the fan blades.

Before purchasing a ceiling fan, you will have to consider where you wish to place it, the size of the ceiling fan, choose proper ceiling fan controls, and confirm its mounting type. If your house has vaulted ceilings, placing doorway fans in the upper corners is the best means of achieving proper air circulation. If you fail to find a proper ceiling fan for your room that hasa vaulted ceiling, then add standalone circulating fans. Positioning of the fan is essential so that it points at the ceiling and helps in efficient air circulation. You can install a ceiling fan in a vaulted ceiling by following the provided guidelines. Before starting with any project, you should stick to the manufacturer’s instructions as this will help reduce unnecessary mistakes which could lead to project failure.

Preparing For A New Life In A Different State